I do think that there are some who should not have the right to weapons and should be filtered from the licensing process. I don’t believe that the right to own weapons should be a afforded to people who have been guilty of a violent crime and I don’t think that the mentally handicapped or emotionally disturbed should be afforded the privilege as well. There are already provisions like this, but obviously nothing so enforceable yet to stem any tides in the violence caused by gang members and the mentally unstable.

My licensing program would be directly comparable to what one must do to drive a car. Go through a training course on proper usage and safety. Have a sponsor and have timed hours like the process that people must go through with a learners permit. Then pass a test for safety and proper usage based on the highest class of weapon you want to carry. Ryan Lackey actually gives a good break down on what those classes might look like in the comments section. Ryan Lackey’s weapon’s licensing by class breakdown.

I will even go so far as to say that there should be a form of liability insurance associated with the registered weapons. This provides an economic disincentive to own, increased pressure to be safe and in the worst case, medical assistance for injuries sustained due to improper handling.

To be honest I think this is the best option to uphold the rights of law abiding users while preserving some key elements of 2nd amendment rights while ensuring that you have a well trained, well regulated, responsible gun owning population. I think that this is a much closer interpretation to what was intended by the founding fathers than what we have now. I think those rights are extremely important, but we have become lenient to the point that rampages, both in the inner city and quiet towns, are becoming too common and need to be resolved.

That said, I know there is a great deal of problems with even this. People still drive without a license and guns will still be in the hands of people who will hurt other people. That’s why I would suggest a large scale effort on a crackdown of people who have weapons they shouldn’t. In the same process that we bust for drugs, I would suggest we hunt down illegal users of weapons as well. To be honest, I think that putting a dent in illegal usage of guns would also help with the drug issue as well since often they are related. At the very least it might be an additional opportunity to catch some bad guys. Yes, there would be compromises. For one, there might need to be some space in the prisons, which means we might have to stop criminalizing some of the crimes that aren’t as much an issue as people shooting each other.

In closing though, I would like to leave on this point on the subject of legislation to correct human behavior… 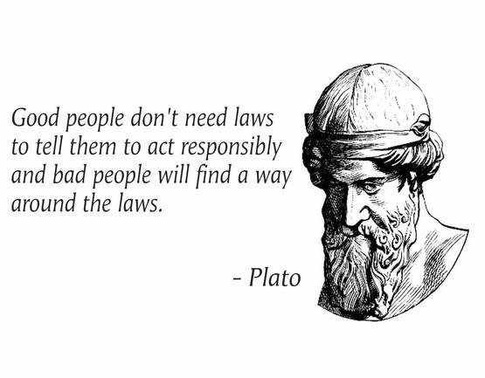