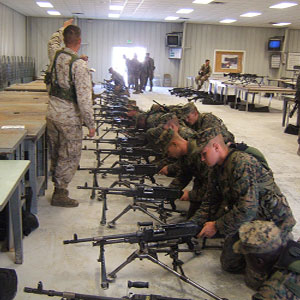 Periodically, Marines would get pulled from the unit for all sorts of different trainings. You might have a week’s training on crew served weapons with a couple guys from the shop, or a two week class session where a few dozen Marines from the squadron learn crash course conversational Arabic and Middle Eastern customs, or even a three day “camping trip” to learn field survival. These trainings are great at improving the knowledge, survivability and mission accomplishment of the Marines in a unit. It also builds lasting relationships with the members within it, sometimes, even with members not even of the same working group.

Seminars, grouped with employees of different work groups so that everyone learns from each other and builds new valuable skills, are invaluable. I don’t mean those “teamwork workshops” by the way, where everyone shares feelings and falls down so that other people can catch them. That’s moronic and tells your employees that you think they are third graders. Did they say they loved the training? Of course they did. People lie to you, partly because you fired Sarah after three months, partly because they may not know what a good seminar is supposed to look like. Send your people to real training so that they feel you value them enough to actually invest in them as a part of the future of your company.

Ask your employees and the supervisors underneath you to suggest training that they would want to go to in the hopes of progressing their own career. Weed out those that you think may be an opportunity for shenanigans and little else, but create a list of the best external training courses within your budgetary and operational scope and send them as often as is possible.

Make Use of Obligatory Training Situations

Every Marine is a riflemen. It isn’t just a neat saying. It is a verifiable fact that the Marines invest millions to ensure. To make sure that every Marine is, in fact, a riflemen, it means we have to train for two weeks and qualify to prove it. That is a major investment on the part of the United States Marines, especially considering only about 1% will ever fire a weapon in combat. Think about that. There is also dozens of annual trainings that must be met; gas mask certification, MOS certification, HUMVEE license renewals along with dozens of others.

You do this already with the federally mandated sexual harassment, HIPAA law briefs for you in healthcare, and dozens of other industry specific seminars you must do every year depending on who you are. Well, you’re probably treating these as obligations because they don’t make you money. You shouldn’t. Good events that bring the company together for training allow you to spread your culture and vision while reinforcing company values of excellence and learning. You need to do them as often as you can because, for the few hours of time you give up, you increase individual and group efficiency from that point on throughout your area of responsibility for the life of the company.

This has been independent, publicly funded article brought to you by patrons via the social crowdsourcing platform Patreon.com.

Thanks for reading! Everything I write is completely independent and made completely free through the generous support of fans and followers through tips and donations made available through Patreon. If you would like to show your support for independent writers like me you can find out more here: Support Jon Davis creating Short Stories in Military, Science Fiction and Life