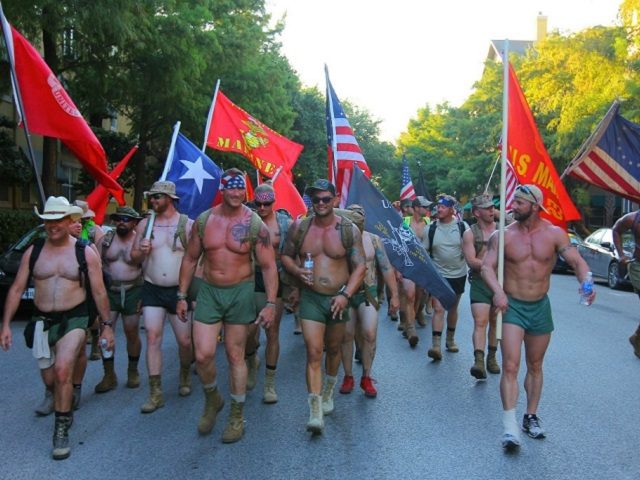 22 men, carrying 22 kilograms of gear, for 22 kilometers. “22 with 22 for 22.” This is the slogan a group of irreverent veterans have adopted for a series of walks across the United States taking place on none other than the 22nd of each month. An obvious question begins to arise, what’s the significance of “22?”

To answer that, I wanted to mention something odd that happened to me a few days ago that inspired this article. I received a Facebook notification from a friend inviting me to an event, BUDDY CHECK 22. I know this guy and know that he isn’t one of those weirdies who invites me to every Facebook game he has ever played so that he will get 20 free magic crystals. He’s an old Marine buddy who I spent time with Iraq. No, this was different. The name stuck out too. The reason it stuck was that number, 22.

22 is a number that has taken on a very significant and somber meaning for the veteran community over the last few years. It signifies the approximate number of American veterans who commit suicide each day. This revelation came from the VA’s 2012 Suicide Data Report, which analyzed the death certificates of 21 states from 1999 to 2011 to arrive at the grim statistic. A more recent study, which surveyed 1.3 million veterans who were discharged between 2001 and 2007, found that between 2001 and 2009, there were 1650 deployed veterans and 7703 non-deployed veteran deaths. Of those, 351 were suicides among deployed veterans and 1517 were suicides among non-deployed veterans.

Between the two reports, veteran suicide has become a major rallying cry for those in the veteran community, particularly for older vets. The majority of the victims of what is being called an epidemic by some, are veterans from beyond the War on Terror years, those who served prior to 2001. The more recent figures, however, showcases an alarming trend, that the rate of suicide for Post 9/11 vets increased by 44 percent in two years.

Suffering years of government failings to respond and alleviate the growing stigma ailing our prior service community, many veterans are taking the matter into their own hands, as was done by Zach Ziegel. Ziegel is a Marine Veteran and a victim, having recently lost a friend to the reality of living after service. According to his Facebook post,

“So I don’t ask much from anyone, let alone on Facebook, but I’m asking all of you to please read this. I’ll be starting an event, and the best part is, that to attend you don’t have to go anywhere. I’ll call it BUDDY CHECK 22, much like buddy check 25 for breast cancer, and it will happen August 22nd, and hopefully the 22nd of every month from here on out. I want everyone to take a minute out of their day and call a veteran, check up on them, and make sure they’re doing alright. By now we all know the statistic… 22 veterans a day commit suicide, and we as a society owe it to them to do something to change that. So please… Attend my event, invite your friends to attend, and change this god awful statistic with me.”

Other veterans, such as the shirtless silkied wonders pictured above, are doing just as much to bring attention to the silent loss of some of America’s greatest members.

Medically retired Marine Capt. Danny Maher — who more commonly goes by his stage name Capt. Donny O’Malley — is combining some of the things Marines love most in his effort to bring awareness to a serious issue: humor and very short shorts known as silkies.

The former infantry officer-turned-comedian is leading participants on a 22-kilometer road march on Saturday while they each carry 22 kilograms — nearly 50 pounds — of gear. The number of kilometers they’ll walk and the weight that they’ll carry represents the 22 service members who die from suicide each day.

O’Malley made more recent news when he challenged none other than Donald Trump to join the walk taking place in New York only a few days from now.

One might ask what picking up a phone or marching around half naked through a city does, realistically, for vets who are facing mental illness and depression. Honestly, these two great veterans organizations are doing exactly what is needed right now. People like Ziegel and O’Malley are rebuilding the communities which are lost when we go our separate ways. They’re pushing for the one thing that, in my experience as an Iraq vet, heals more of the mental and spiritual wounds we suffer regularly after war or time in service.

It isn’t just me though, experts are agreeing that the single best thing that can be done for the mental health of many of these individuals is community.

This wisdom is backed up by sound logic.  Sharon French, a former professor of Ethics at the United States Naval Academy poses the question in her book, The Code of the Warrior, of whether or not so many post Vietnam era veterans are suffering right now is that they weren’t forced to endure community as part of the long ship rides home after war. The Code of the Warrior discusses the historical motivations behind why different warrior cultures decided to fight and how they were welcomed back into society after it. She notes that virtually every warrior culture until only the last two generations forced troops to endure long trips home as part of a cool down phase. This was the case with those who served in both theaters of World War II and most wars prior, but not after the advent of commercial aviation in Vietnam.

A second musing comes from Lt. Col Dave Grossman one of the world’s most respected thought leaders on the psychology of those who endure combat and the military mindset. After making a career of after-action debriefs and counselings with veterans he one major point of advice, which can be found in his book, On Combat.

Healing happens when warriors share with other warriors in environments where they feel safe to enjoy one another and feel as if there are others who understand what they are going through. In many cases, psychologists who specialize with those who have military service records, say that it isn’t even best for friends and family to try to be healers for their veterans, and maybe seeking professional help isn’t the first place a veteran should go. They say that it is often more damaging to insist that a veteran may be psychologically broken and in need of professional therapy, when really they may only need to connect with others like them. They also have said that it may be better for families to help their vet find their way to other communities of veterans they can interact with in person, or even better, to reactivate those relationships with their friends they served with years ago.

Bringing veterans together in communities built on camaraderie, compassion, and comedy – restoring brotherhoods, this is the subtle change that has an impact in saving lives and something the rest of us should celebrate and support. If you’re a veteran, pick up the phone this next couple of days to check on one of your friends who has served, no matter how young or old. If you’re not, consider pushing someone you know and love toward joining with other local veterans’ organizations. Whoever you are, help the veteran community remember the 22 of our fellows lost every day to the silent plight of depression, loneliness, and mental health disease. Support these causes and spread the word for vets.

Make sure to share and follow JDT for more articles geared for military and vets. To support JDT please visit my support page to find out how.