You see this thing? This thing’s a thing. It’s called a machine gun. Its job is to say to any individual who might have some cute idea about doing something stupid:

Most modern tanks come equipped with some form of secondary measure to take out individual troops that are too close for the main gun. You’re going to have to get very, very close to try this movie stunt. If you’ve got a great arm and crazy good aim you might be able to sink that putt at 30 yards. Just as a warning, to get that close, you’ve been in the range of the “small” gun for about a mile.

Beyond that is that a tank is usually not alone. They are normally supporting operations that require the mobility of hundreds of ground forces, if not thousands or even tens of thousands. Tanks cost money. They are not used lightly and are never alone. If you want to get to a tank, you’re going to have to get through the growling little honey badgers that it is supporting.

Good luck with that.

That said, when you’re fighting against idiots, it’s possible. Marcus Henry Weber’s answer shows just a situation when exactly this happened. During the Syrian Civil War, rebel fighters fighting against Assad’s forces snuck up to a tank and literally threw a grenade down the main gun’s barrel. It appeared to roll down into the main cavity of the tank, blow up, and kill the crew before igniting the ammunition in a rather spectacular light show. 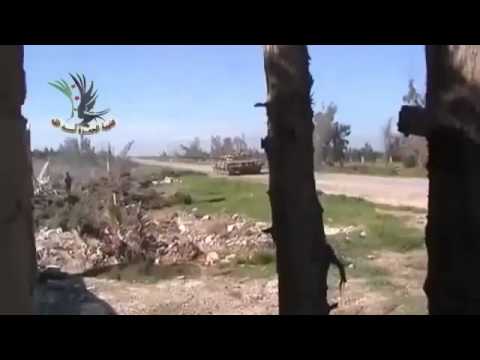 What you’ll notice is that, according to my earlier statements this is exactly how not to use a tank. You’ll see no secondary weapon, at least not one manned, nor will you see any supporting infantry. And what happened? A bunch of guys literally a few yards away wearing blue t-shirts and flip flops casually jaunted over to the tank and blew it the kingdom come. And this is why the Syrians suck at everything. To tell the truth, I’m not even certain the vehicle wasn’t already abandoned, to begin with and this was simply made to look like something cooler than it was.

That said, unless you fight a war against morons, say you’re fighting people with actual experience like the US military, this “tactic” is not a real thing.

Thank you for reading. If you liked this series, please like and follow The War Elephant on Facebook. Reports like this are made thanks to support from patron donations through the social funding site Patreon. If you want to help me make more content like this, please visit my Patreon Support Page to learn how.